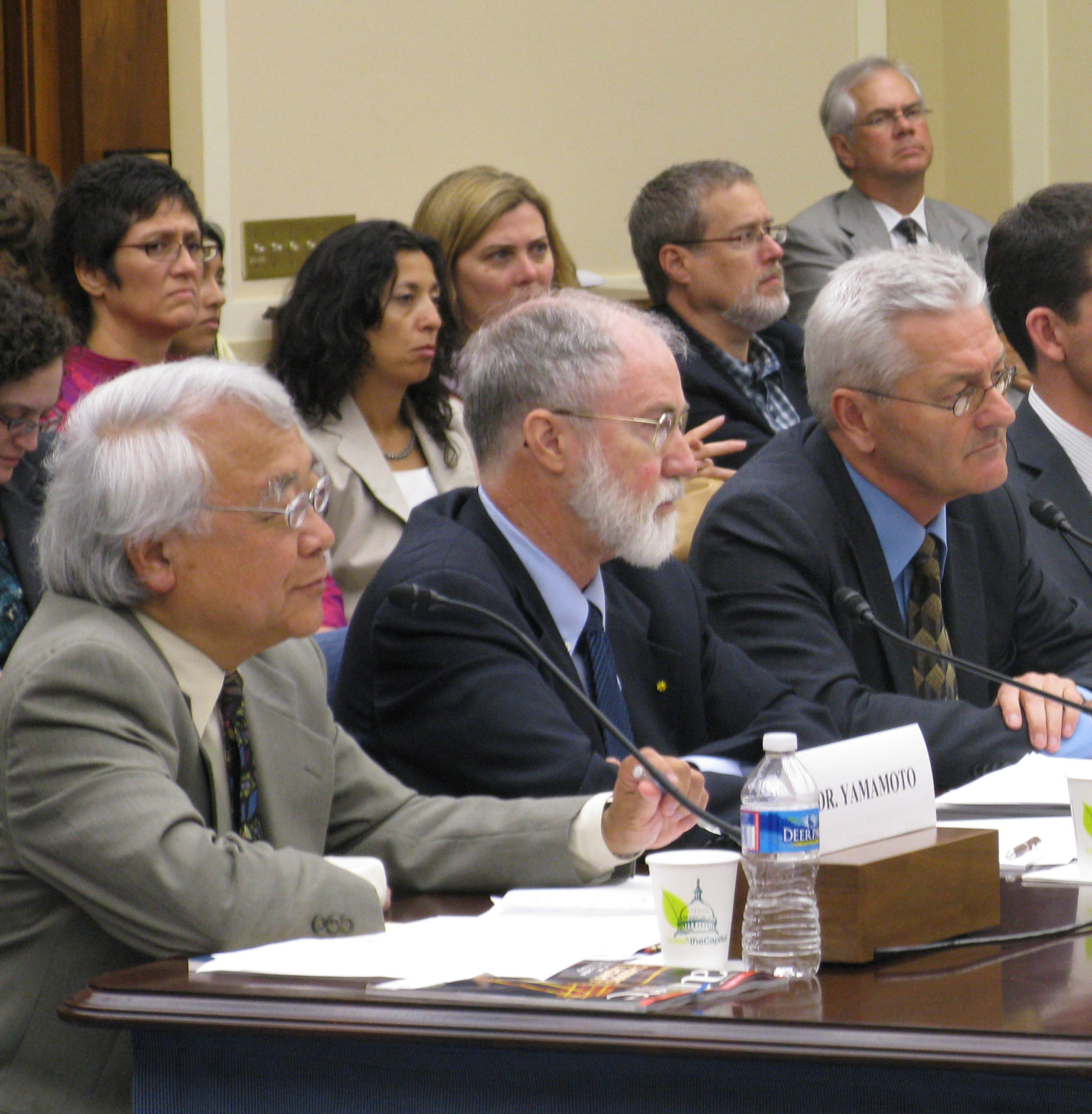 Good morning, Chairman Comstock, Ranking Member Lipinski and Members of the Subcommittee. Thank you for the invitation to present a statement before you today. I am Keith R. Yamamoto PhD, Vice Chancellor for Science Policy and Strategy, Director of Precision Medicine and Professor of Cellular and Molecular Pharmacology at the University of California, San Francisco. I received a Bachelor of Science from Iowa State University and a PhD from Princeton University before migrating to San Francisco, where I have been on the faculty for 41 years. My molecular biology lab has been studying the detailed mechanisms by which small molecules made in our bodies, hormones, control important physiological processes such as metabolism, stress responses and immunity; that research has been recognized by my election to the National Academy of Sciences, the National Academy of Medicine and the American Academy of Arts and Sciences, among other honors, and in the course of that work, I have had primary responsibility for mentoring approximately 100 PhD students and postdoctoral scholars. Our research has been funded continuously by grants from NIH, and commonly from NSF; we are currently funded by both agencies.

For over 35 years, I have also been active in matters of science and public policy, leading or serving on dozens of committees focused on a broad range of issues, challenges and opportunities, including matters of merit review, on which I testified in 2011 to this subcommittee. In particular, I chaired the Board on Life Sciences for the National Academy of Sciences, which produced two reports, “A New Biology for the 21st Century” and “Toward Precision Medicine: Building a Knowledge Network for Biomedical Research and a New Taxonomy of Disease”, and co-chaired a study committee for the American Academy of Arts and Sciences that authored a report, “ARISE 2: Unleashing America’s Research and Innovation Enterprise”. These exercises and a range of related activities have provided me with a perspective on two topics essential for consideration of the future of NSF: [1] opportunities, imperatives and barriers to achieving transdisciplinary science; and [2] wisdom and perils of prioritizing research around scientific or societal needs and challenges. In my testimony today, I shall address each of these matters from the context of a fundamental question: “If we were to start from scratch today, how would we organize the NSF to ensure that it motivates, identifies and supports the boldest, most innovative science with greatest intellectual and societal impact?”

The New Biology, Precision Medicine and ARISE 2 reports all call for development of transdisciplinary science, virtually a merger of concepts and technologies of physical and natural (including cognitive and social) sciences, engineering and computation, as distinct from interdisciplinary or multidisciplinary interaction and cooperation between these endeavors. According to this concept, scientists would employ a computational “knowledge network” that identifies relationships or correlations between different concepts, data and technologies, enabling assembly of teams of highly trained specialists, each team member with different expertise, to form dynamic aggregations set to tackle difficult, important problems.

Thus, the role and need for specialization would be maintained, but a general “transdisciplinary literacy”, coupled with computer-identified linkages of ideas and people, would open new and powerful networked approaches to address and solve problems that are intractable within any of our currently siloed disciplines. I have suggested elsewhere that if each investigator were to be involved in multiple (say, 5-10) such teams, he/she would comfortably include several very high risk problems, as other projects in his/her “portfolio” would be already succeeding or enjoy relatively high feasibility; de-stigmatizing failure, a cultural standard in Silicon Valley, could dramatically change the risk profile of academic research, and increase the proportion of spectacular advances.

Of the ~25 federal agencies that support scientific research, NSF is best situated organizationally and philosophically, thanks to the remarkable vision and wisdom of Vannevar Bush, who proposed in his brilliant 1945 report, “Science the Endless Frontier”, creation of the NSF to provide federal extramural support for all U.S. basic research and education programs. He could not have stated the rationale and the imperative more clearly: “new knowledge can be obtained only through basic scientific research”, “no amount of achievement in other areas can insure our health, prosperity, and security as a nation”, “it is wholly probable that progress in the treatment of…refractory diseases will be made…in subjects unrelated to those diseases, perhaps … chemistry, physics”, “a new agency should be established…devoted to the support of scientific research and advanced scientific education alone”, “these functions should be centered in one agency”, “separation of the sciences in compartments, as would occur if more than one agency were involved, would retard and not advance scientific knowledge as a whole.”

Bush proposed five divisions: medical research; physical and natural sciences; national defense; education; publications and collaboration. Medical research, of course, was largely lost to NIH. Today’s NSF has seven Directorates: biological sciences; computer and information science; education; engineering; geosciences; mathematical and physical sciences; social, behavioral and economic sciences. While these are generally reasonable and necessary specialty foci (except for the absence of health research) for today’s and tomorrow’s research and education, even within NSF, where some admirable multidisciplinary activities are in place, it is a natural outcome that bureaucratic and fiscal silo walls harden intellectual siloes as well, inhibiting in many, likely most cases, effective transdisciplinarity.

Outside of NSF, I propose that a chosen body secure supplements to agency funds (including philanthropy and public-private partnerships) to highlight and approach a few societal-scale grand challenges (analogous in some ways to OSTP’s Presidential Initiatives in the Obama administration), that would incentivize multiple federal agencies to develop joint programs that leverage their particular strengths and resources, e.g., biomedical approaches at NIH coupled with materials and device engineering, and machine learning and high performance computing at NSF and DOE national labs. This would begin to address the fragmentation of federal support for scientific research across many agencies that currently communicate and cooperate sparingly, and indeed typically compete.

“The Usefulness of Useless Knowledge”, penned nearly 80 year ago by Abraham Flexner and just renewed in a companion essay by Robbert Dijkgraaf, is a stirring and timeless assertion that untargeted, curiosity-and imagination-driven basic research is the sole essential enabling component behind the development of every society-

transforming tool and technology. Vannevar Bush’s aforementioned report echoes that assertion and charges NSF to uphold the mantle for basic research: “new products and processes are not born full-grown. They are founded on new principles and new conceptions which…result from basic scientific research. Basic research in scientific capital”; “the most important ways in which the Government can promote industrial research are to increase the flow of new scientific knowledge through support of basic research, and to aid in the development of scientific talent”; “there are within Government many groups whose interests are primarily in applying fundamental knowledge to the special problems of [their] Departments“; “there should be a focal point within Government [to] furnish the funds needed to support basic research in the colleges and universities”.

Is there justification, then, for NSF to embrace grand challenges or big scientific goals, and can they be framed in ways that do not inhibit, indeed that stimulate scientific curiosity and imagination? Interestingly, yes. Perhaps the primary justifications are urgency (there are societal needs and challenges that must be addressed efficiently) and social justice (there are disparities in access to social services, e.g., health care, clean air and water, that must not stand), and the hope is that putting a bright light on these issues will hasten fundamental discoveries that will in turn produce solutions. What greater Broader Impacts could there be?

Importantly, a well-framed grand challenge or big goal neither constrains curiosity and imagination, nor narrows the range of basic discoveries that can contribute. Indeed, a well-enunciated grand challenge cannot be addressed with current concepts and technologies, and is framed in ways that captures curiosities and imaginations, and then involvement, of scientists thought at first to be outside the field, unable to contribute. Such was the case with the man-to-the-moon project in the 1960’s, and the human genome project in the 1990’s.

Thus, the right kinds of big ideas broaden the minds of those who contribute, and broaden the tent to new contributors. The scale and scope of the challenges will determine if they best reside within NSF or rather merit attention and support from multiple government branches and agencies. Good examples include some of the recently announced “Ten Big Ideas for Future NSF Investments” such as predicting characteristics of biological organisms, and creation of technologies that “collaborate with humans to enrich their lives in the workplaces of the future”, or some of the grand challenges issued in 2015 by the National Academy of Engineering, such as “Reverse Engineer the Brain” or “Provide Access to Clean Water” or “Advance Health Informatics”.

NSF is the federal agency that is best positioned to define, defend and support the broad spectrum of basic research that must receive public funds in order for our society, its citizens and its economy to thrive. In general, it addresses that challenge admirably, although it is constrained by organizational barriers that separate its disciplinary directorates at a time where true transdisciplinary science is essential to achieve the most significant advances. There are organizational approaches within and outside of NSF with potential to reduce or eliminate those barriers, and merit consideration. Although it is essential that NSF stay true to its mission to support basic discovery, it can meet that challenge, and perhaps even improve upon it, by framing its support programs in the context of big ideas and grand challenges.

This concludes my testimony. I would be pleased to answer your questions or address your comments. Thank you again for the opportunity to discuss these important matters with you.